As Hurricane Isaac makes landfall in rural Louisiana today, I'm reminded of this day seven years ago. August 29, 2005. Katrina day. I will never forget that date. Ever.

We had close calls with storms already that hurricane season. Tropical Storm Arlene hit near Pensacola, Florida on June 11th. Hurricane Cindy made landfall near Grand Isle, Louisiana/Waveland, Mississippi on July 5th. Hurricane Dennis hit Pensacola again on July 10th. I think by the time Katrina rolled around on August 29th people were kind of numb to it all. And skeptical. Our local authorities had told us each time, "This is it! The big one! Be prepared!" People prepared and at the last minute the storms turned or it wasn't as strong as predicted. Most everyone was unprepared.

My mom, dad, and I volunteered for the local chapter of the American Red Cross. All three of us had run shelters in the past so when my dad came home from a meeting to say, "We're in charge of a shelter again." it wasn't a big deal to me. Our church had a huge Family Life Center (like a big gym) that the Red Cross had used before, so that was to be our shelter. The shelter wasn't for people in our home town, after all. It was for people that lived on the coast or in the path of the storm. It wasn't for us.

On Saturday August 27th we packed our bags and left for the shelter. My sister stayed behind to watch after the house and the dogs. We didn't think anything of it because this wasn't going to be a big deal.

The word "Camille" kept being thrown around. Camille is a sacred word, a word not often spoken. Being from the Gulf Coast region hurricanes and weather in general doesn't scare me much, but all the talk of Camille made me uneasy.

People trickled in slowly at first from all over the Gulf Coast. Biloxi. Pass Christian. New Orleans. Waveland. Houma. What was just a small hurricane was now a category 3. Over the next nine hours we'd watch it intensify to a category 5, the strongest there is. I remember the Mississippi governor, Haley Barbour, urging people to not stop. Keep going north, as far north as you can. The storm is too big. The realization that we weren't far north enough hit me. A mandatory evacuation was finally given and then everyone seemed to arrive at once. Elderly. Children. An insulin-dependent diabetic. A woman eight months pregnant with twins. Even people from our own town were coming in because they didn't feel safe. We were set up for 80 people, and only had about 40 cots. Mom kept turning people away, urging them to keep driving. Keep driving anywhere. But at some point on early Sunday morning it was too late for that, we had to take anyone who stopped because there was no more time. Nowhere else to go. Suddenly we had 130 eyes staring at us, waiting for help. For food.

The day of the 29th and the days following are a bit of a blur. I'm not sure if it's because it's been seven years or because I've made myself forget. Memories are slippery things. Even the moments you think you'll remember forever become cloudy and strained. Even so, there are some memories that will forever being engraved in my mind.

Losing power and realizing that without power and water the toilets won't flush. Eight non working toilets for 130 people.

Multiple tornado warnings. Having to get all 130 evacuees from the Family Life Center over to a more secure part of the church that was underground. Which meant no air circulation with people who hadn't showered in days.

Not being able to get in touch with my sister or boyfriend (now husband). I was sick with worry and fear.

The Family Life Center had taken structural damage at some point, but we couldn't go outside to see. One of the corners of the room was cracked. I could hear the wind sucking at the roof and the side of the building. I could see the angry sky outside through the crack.

A squirrel that had taken refuge underneath the edge of the roof outside on top of a brick column. He was there for two days.

Trapped. The storm was over, but we had nowhere to go. Destruction was all around us. My dad left to try to go check on my sister but didn't make it a quarter mile before having to turn back around.

Hunger. Hunger was everywhere. I was hungry and so was everyone else. Before the storm hit a local food company in town had donated some frozen dinners. We lit the gas stove in the kitchen with a match and over the course of about two hours cooked hot meals for all our evacuees. It was the only hot meal we had. My clothes stuck to my body with sweat.

At one point we thought we were going to run out of food and water. We sat everyone down to share the news. That night an employee of the Red Cross showed up on a four wheeler with food and supplies. I locked myself in a Sunday School room and cried.

A member of our church somehow managed to get through all the debris and show up for help. We caught him stealing food out of the kitchen. "We had to have hot dogs last night and I was only able to eat two." he said to me. I didn't tell him about the three saltine crackers with peanut butter that had been my dinner the night before. I lost all respect for him that day and was never able to look at him the same. Even today when I picture his face in my mind anger rushes through my veins.

Heat. We had record breaking temperatures in the days following the storm, which made life without electricity that much more unbearable.

Love bugs. They were everywhere. Seriously, hundreds of them. You couldn't even talk without bugs getting in your mouth. And because we had to keep the windows open they came inside and died there. When I moved out in 2007 I was still finding dead love bug carcasses in my room. I imagine some are still there.

On Wednesday the 30th the roads had finally been semi-cleared enough for some traffic to get by. We had our first look at the outside world only to find devastation was there, too. The bridal shop where I worked seemed utterly destroyed. My mind went to the girls who were supposed to get married that weekend and how worried they must be about their dresses.

A Red Cross employee came by and said they were combining all the shelters in the county into one big shelter. We gathered everyone up and sent them on their way to the new shelter, but we didn't join them. We went home. We had been away from home for five days and longed for our own beds instead of the hard gym floor.


Miraculously enough there was no damage to our house. Not even a shingle came off. We lost tons of trees in the yard, but that was it. It would be five more days before FEMA would get to our town to deliver water and supplies, and we would have sixteen more without power. 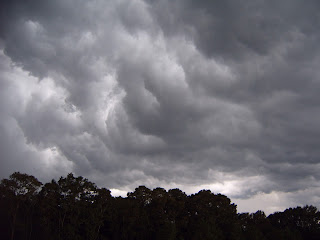 The first band coming in. The only picture I got of the storm itself. 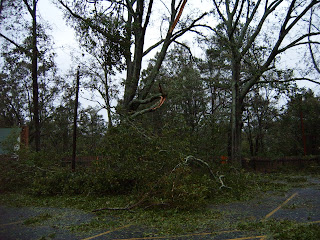 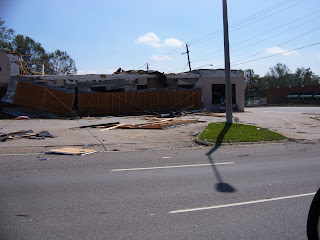 The bridal shop where I worked. Believe it or not it was all outside structural damage and not a single dress was lost. 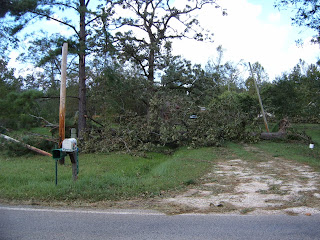 Two huge trees blocking our driveway, our house is back there, barely visible in the picture. 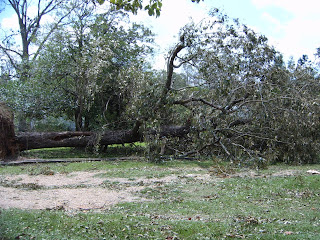 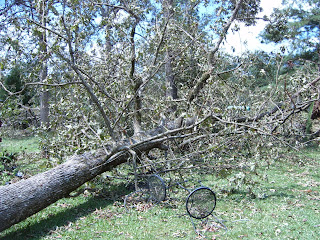 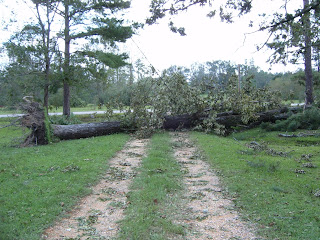 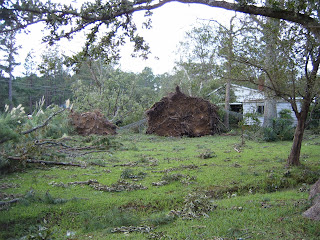 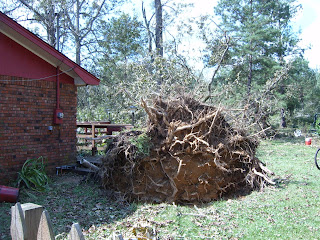 This tree came so eerily close to hitting the house 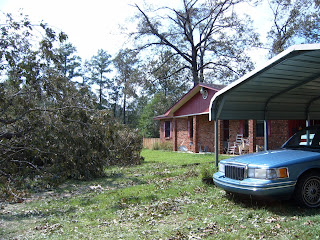 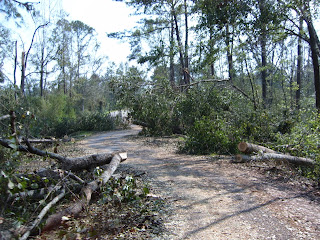 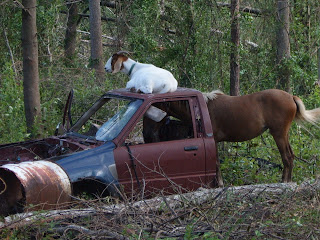 On the way back from checking on my grandparents we came across this. I have no idea either. 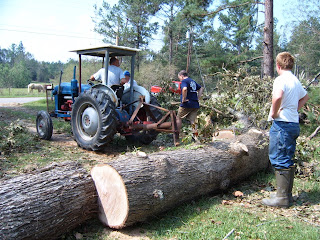 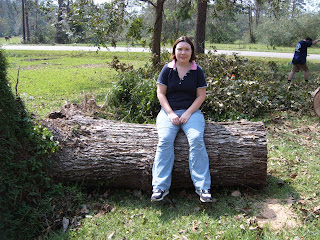 My sister sitting on a tree stump 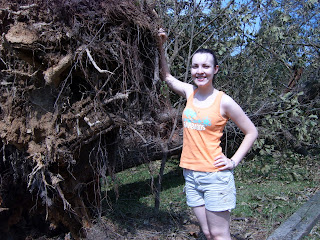 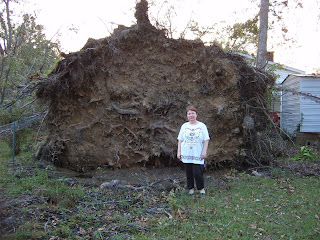 My mom with one of the fallen trees in our yard


I know everyone has their own Katrina story, but this is mine. It was a long time before I looked at life the same again. Even today sentences are often started with, "Well before Katrina..." It was a life changing event for a lot of people. I know it was for me.