We're so fortunate to have ALA Midwinter in Dallas this year! Of course me and my Literary Lonestar pals will be there, and we cannot wait! We're planning a little blogger get together on Friday night January 20th. If you want to come, please go to Jen's blog and RSVP so we can have a head count. And for more information about ALA itself, visit their website! Will I see you there? :)
Posted by Stephanie at 6:38 PM 2 comments:

So Much to be Thankful For

That Wednesday started out as many normal days do. My husband got up and was getting ready for work, and I was lounging in the bed (it takes me a long time to get awake, I'm a big lounger :p). He came to tell me goodbye and I thought he had left. He came back in the room and as calmly as he could said, "You might want to call your mom... when you get up and get the chance." What? Why? "Their house got hit by a tornado early this morning." You know those moments where your heart plummets so deep down into your stomach, you feel like you'll never be able to breathe properly again? This is one of those moments. I called her and we talked for a while. Well, she talked, I squalled the entire phone conversation. I have never felt so heartbroken, so conflicted. I cannot tell you how painful it is to have your heart reside in two different places, both far away from the other.

Thankfully everyone is fine and escaped the storm unharmed. My mom's truck has to have some repairs, my dad's truck was totaled, and the house had some heavy damage, but nothing that isn't repairable. I can't tell you how many prayers of thankfulness I've uttered since then. Things could have been so much worse than they are. My parents have a long road ahead of them as the repairs are starting on their house, but we're all thankful and grateful.

I have blogged a few pictures about my childhood home previously (click here and here if you're interested), so I'd like to share some of the aftermath pictures with y'all today. Hug your loved ones extra tight this holiday season. Things can (and do) happen in the blink of an eye. 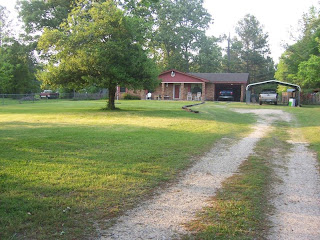 The front yard before 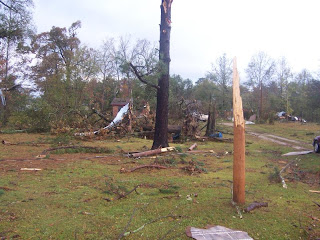 The front yard after (the house is there, through the debris) 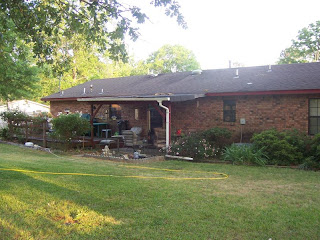 The back yard before 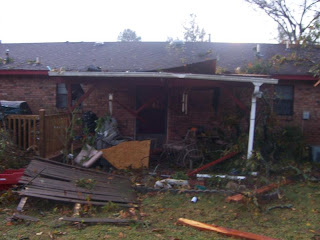 The back yard/back of the house after 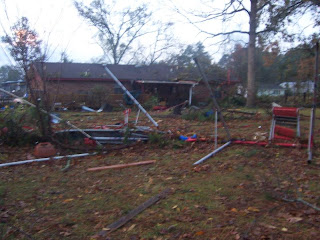 Part of our old swing set. It's about 20 years old and made it through Katrina. 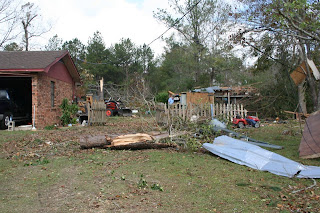 There was a covered carport here where my dad's truck was. They have no idea where most of the carport ended up. 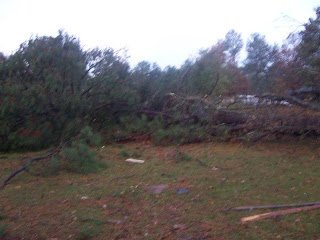 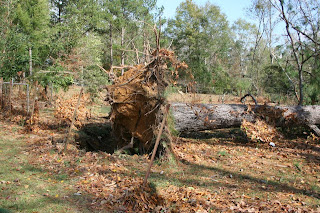 None of the pine trees my dad planted when they built the house survived. :( 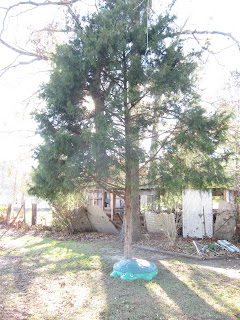 One of the few trees that survived. (Along with my nephew's sandbox that wasn't moved an inch.) 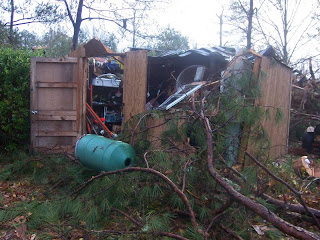 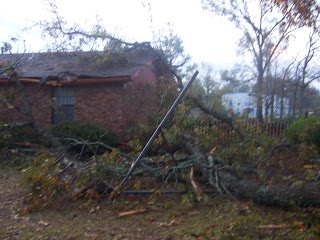 Side of the house where a big piece of a tree came down. 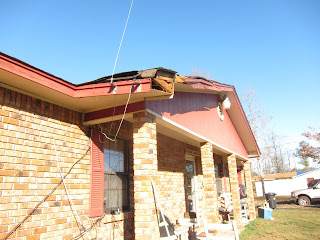 Damage to the front of the house. 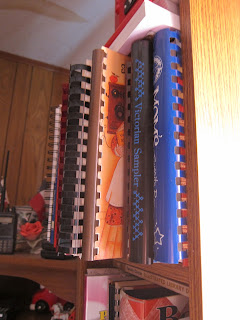 My mom, like me, is obsessed with books. Particularly cookbooks. All of her books are hanging about three inches out, from where the wind sucked them. Crazy. 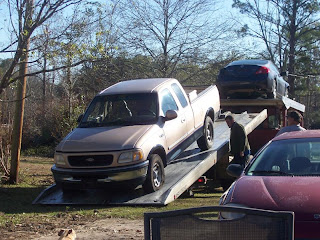 The insurance company towing my dad's totaled truck away. So sad.
Posted by Stephanie at 2:05 PM 4 comments:

I've never said I was the best blogger. On the contrary, I'm probably the worst blogger I know. It's not that I don't enjoy blogging, I do, it's just... effort. And I'll be honest, sometimes (well most of the time) watching Youtube videos about cats is way more entertaining than writing a blog about my boring life. However, people do ask me every now and then how a certain project is going, and I'll realized I haven't blogged in a while. So this is fixing that. Yeah.

I did manage to "win" NaNoWriMo! Unfortunately I did not finish the book yet, but I managed to make it to 50K by November 21st. Yes I'm the idiot who finishes NaNo in three weeks. I don't recommend that any of you do that, but I wanted to "win" before we went home for Thanksgiving, and I did. I worked so hard those three weeks, and it was such a learning experience. It was my first middle grade book, as well as my first third person book (what can I say? I'm a sucker for pain.), so I learned a lot. It's probably one of the worst books I've written, but I also think it's one of the best. Yes, that sounds weird, I know. I started this book mainly as a joke. My goal was to make it as ridiculous and silly as possible. But the more I worked on it and the more I got involved with the characters... the more I thought I may actually have something. I've told the idea to a few people, all of whom are very excited. Which is silly to me. It almost makes me feel like I've cheated, you know? Not that writing this book was anywhere near easy, but it seemed easier. I don't know if it was the book itself or if since I've been writing so much it doesn't seem as daunting of a task anymore. And trust me, nothing is as daunting as that first book you try to finish.

I won't tell you what the book is about, and it doesn't have a name yet, but I call it Dead Santa. (My point with the book was to get in the Christmas spirit, we can see from what I call it that it didn't really work out.) I have about 10K left on Dead Santa, and I'll be done. It's been a bit... difficult. See this book broke all sorts of boundaries for me. Usually when I write a book I write the ending chapter first, then the beginning, then a main plot point that's around the middle of the book and fill in my gaps. But with Dead Santa... I just wrote whatever popped into my head. That was the point right? To make it as ridiculous as possible. I didn't want to give myself time to over-analyze things, so I just wrote. (Seriously, the book has talking gangster penguins and elves that are more like evil fairies than Santa's little helpers.) The problem, you ask? Well since I didn't write the ending first... I don't really know how to end it. I mean yes, I sort of know how it ends, but since I don't know exactly how ahead of time, I just keep rambling on and on. Well, my characters do anyway. They keep talking in circles, repeating the same questions, running around to random places. So as stupid as this sounds, if anyone has any advice on how to end a book, that would be lovely. Ha.

Since I did work so hard in November on Dead Santa, I decided after Thanksgiving to give myself December off.  Seemed like a good idea. I needed time to rest and prepare for the upcoming Christmas holidays. What seemed like a good idea actually made me a little crazy. I had a conversation with someone recently about how I didn't really feel like a "real writer." They said to stop writing for a while and see what happened. The results weren't good. These past two weeks I've been a little crazy. More than a little, actually. Even my poor husband noticed (and bless him, he doesn't notice much) so you know it was bad. I was listless. Restless. I recently made a Pinterest account, and while it was fun, it didn't do anything except help me waste more time. I cannot tell you how many craft projects and new recipes I've tried. No, it doesn't sound bad, does it? (Tell that to the five different wreaths I've made.) And I guess it's really not that bad, but I wasn't putting my time and energy into what's really important: Writing. It's my work, my job. It's what I do. It's how I should spend my days and how I'll eventually (God willing) make my money. I'm a creative person, and without weaving my creativity onto paper (or typing it on to a screen, actually), I felt useless. Apparently my brain and hands still need to do something creative, which is where all the crafting comes in I guess. It's interesting to be able to analyze yourself sometimes. And yes, it's nice to take a step back and get some prospective on your life, take a breather, but it's also good to be able to have the foresight to know when it's time to come back.

With all that being said, I am writing again. I worked a bit on Dead Santa today (yes the characters are still talking in circles, but at least they're doing something), and it feels good to be doing productive things again. Hopefully I'll finish the book before the end of the year. I have a few more topics I wanted to cover in this post, but it's already too long, so those will come later this week and next week. One will be about my 2012 goals, the other will be about how thankful I am for my family after my parent's house was hit by a tornado the week before Thanksgiving. Thank you all for reading my rambling blog posts and supporting me even when I am crazy. <3


Posted by Stephanie at 4:57 PM No comments: