To clarify, stuffing and dressing are very similar. Stuffing is actually stuffed inside the bird of your choice while dressing is served as a side dish. I'll be honest: stuffing freaks me out. I don't feel like the bird can properly cook when it's stuffed with... stuff. Plus the act of actually stuffing said bird freaks me out even more.

This is actually my Mother-In-Law's dressing recipe. Hope she doesn't mind me sharing it with you all!

Place cornbread, bread, onion, and bell pepper in a food processor. (I don't own a food processor but I use my blender and it works fine, you just can't cram everything in at once and need to pre-chop your veggies.) In a bowl combine your bread mixture along with the eggs, poultry seasoning, and chicken broth until soupy. The picture below would be "soupy" which is similar in consistency to grits or oatmeal: 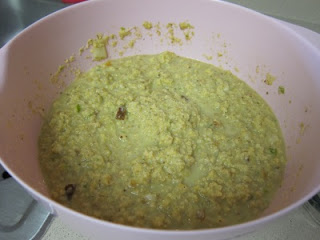 Place in a large casserole dish and bake in a 325 degree oven for 45 minutes to an hour, depending on how mushy you like your dressing. We like ours a little more on the not-mushy side so it usually takes an hour, if not more. Ta-da! 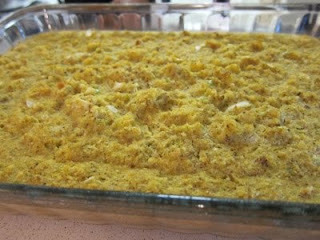 *You can use whatever cornbread recipe you like, but if you'd like to use my MIL's, here it is:

Combine ingredients and incorporate milk until batter is the consistency of a pancake batter. Heat an oven safe skillet (preferably an iron skillet) with a small amount of oil to cover the bottom. Once skillet is heated add batter and cook for a few minutes, just to cook the bottom. Then transfer to a 450 degree oven for about 8-10 minutes or until golden, brown, and delicious. I usually do this the day before simply to cut down on my oven time day-of.
Posted by Stephanie at 8:00 AM