This past weekend I had the pleasure of volunteering at the Austin Teen Book Festival. I wasn't able to attend last year so this year I was determined to go! I'd been looking forward to it for months.

There were three panels at ATXTBF, and I had the pleasure of being a panel host for the Dastardly Daydreamers panel which included authors Melissa De La Cruz, Nancy Werlin, Sophie Jordan, Kiersten White, and Alexandra Adornetto (who wasn't able to make it because she was sick.) What's the job of a panel host, you ask? Basically I was to step in and throw elbows if anyone got too close to the authors or prevented them from getting to their next panel on time. Sadly (or maybe not really), everyone was really respectful and well behaved so no elbows were thrown. 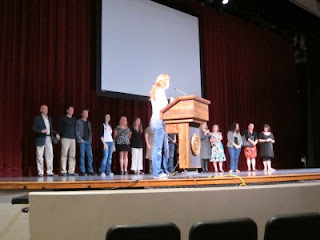 The day started with a keynote from Ellen Hopkins. It was the last day of Banned Books Week, so it was almost fitting that Ellen was here to give a keynote. She talked about her books being banned and challenged (her books have been banned/challenged three times). She read a few fan emails from teens who have benefited from her books. The emails were very emotional and I don't think there was a single person in the room who couldn't have been touched by them. 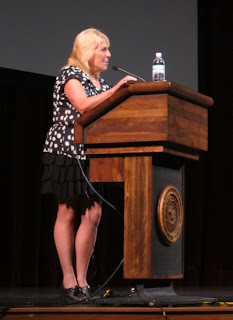 Since I was a panel host, I had to stay with my panel authors all day. Yes that means I wasn't able to see the other two panels, but I got to hang out with a wonderful group of ladies all day! I can't think of a better way to spend the day.

Even if I do say so myself, our panel was amazing! My friend Jen Bigheart was the panel moderator and everything was extremely smooth and organized. Authors answered whatever questions they were asked (including questions about why vampires sparkle, to which Melissa De La Cruz answered, "Well since Stephenie Meyer isn't here, we can't answer that."). 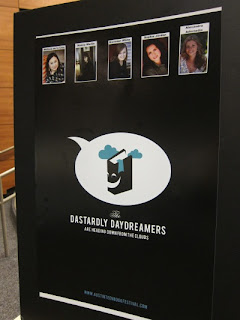 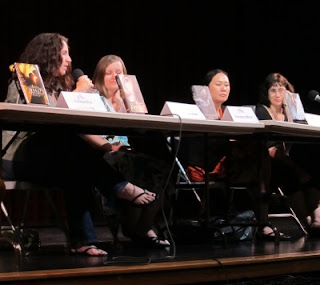 We had a quick lunch break and I tried not to fan-girl out when I sat with my panel authors and directly next to Ellen Hopkins. We ate and talked about books and book banning and writing. After lunch we had two more panels and then the authors signed books. While we're eating, the drama department of the high school we were in came and did a fantastic rendition of the Thriller dance. Zombie-hilariousness ensued! 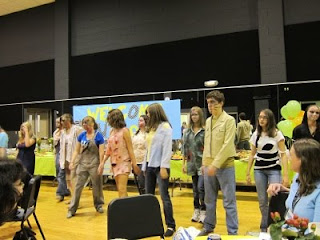 The only picture I have with me and my panel authors is with Sophie and Kiersten. Part of the reason is that I forget to take pictures and the other is I'm always a little embarrassed to ask someone to take a picture with me. What if they say no? Ha! 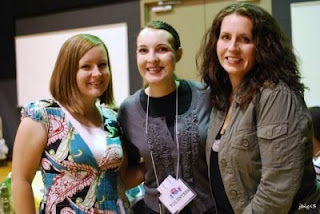 It was an amazing day. The event was so organized and put together! I've been to and volunteered at many-a-festival and I have to say this was one of the best I've ever been to. I'm already looking forward to next year! While I didn't get anything to give away, head on over to Jen's blog where she's giving away some signed swag.
Posted by Stephanie at 1:58 PM